I say "end of season" but in reality we still have a few more weeks left, at least 5 I'm hoping. We've had several outings on Coincidence since the new motor went "online."

There really isn't much I would change about this system. The newness and unfamiliarity of the throttle and nature of control has gone. In fact, I find it to be much more responsive and beneficial when docking. I've had the boat out on a few days with heavy weather (on our lake: 20mph winds and 2-3ft swells). The electric motor performed as well if not better than its 15 hp ICE predecessor.

The other common reservation with electric systems, battery capacity, was one that I shared going into this. Time and experience with the new system has done much to add to my level of comfort if not completely erase this concern. Granted over time the batteries will hold less and less of a charge but this will be a gradual process. The bank's lifetime expectancy is around 1000 cycles provided they are well-maintained. Battery abuse has a lot of gray area, but an example would be heavily discharging them then letting them sit for a week.

On one particularly long motor outing I took them down to about 65%. We motored for over 2 hours at 4-5 knots, at a distance of 5 or 6 miles. When motoring in heavy seas, I saw depletion of about 6-8% after heading into wind and waves for about 2 miles.

While I do dread having to put the boat in storage for 6 months, I do look forward to the winterization process (or lack thereof) for the new system. Draining and replacing the outdrive oil is about all that will need to happen.
Posted by eharms at 5:15 AM No comments:

I realized I never posted new performance data. As mentioned in an earlier post, the knotmeter was off considerably. Below are the new figures. This time around I also made sure the boat had come up to speed for a full minute or two before taking a reading.

Scott at Electric Yacht is generally pleased with the performance, but said he expected a little better. I was hoping to get 5.5 to 6 knots, which is close to the boat's theoretical hull speed. Scott said this could be approached with a swap of one of the pulleys transferring power from the motor to the outdrive. I may opt to do it in the off season.
Posted by eharms at 8:28 PM No comments:

After a few more outings the motor (and myself) are settling in. Shortly after taking the new system online, I realized my instrument pods weren't working. Knotmeter is operational but that isn't powered--anemometer, wind indicator and depth gauge aren't showing any signs of life. I think it's a good thing that all are not working, indicating it could be a fuse or switch, which should be easier to diagnose than an individual wire. These were hit or miss in the seasons prior but last year I finally found the ground issue that was causing the problems. Then the motor went out. So now that the motor is working, the instruments are not. Nothing totally necessary at this point though.

Also, a few days ago I realized the head is having issues too. I much more like dealing with electricity. It's less dangerous.
Posted by eharms at 9:51 PM No comments:

Took family out this evening--and recorded more data using two GPS units. Apparently my knotmeter is due for calibrating. Full throttle is giving me about 5 knots.

Posted by eharms at 9:57 PM No comments:

I hooked up the shore power today to top off the battery bank. Even though the battery monitor was showing a 77% charge, the charger indicated somewhere in the low 30s. The manual states this number shouldn't be interpreted as progress to full charge, i.e. it could take 2 hours for it to go from 30% to 40%, then another 2 to get to 100%.

I didn't want to leave it unattended, so my wife, son and I rigged the boat and cleaned it while it was charging. It was plugged in for about 3-1/2 hours and it got up to about 85%. We had finished up everything we needed to do, so I disconnected the power cord and checked the battery monitor. It read 100%--confirming my suspicion that the monitor may not indicate the same charge as the battery charger.

Later,  I returned to the boat and hooked the charger up again. The readout indicated 85% and within 15 minutes it came up to a completed charge. 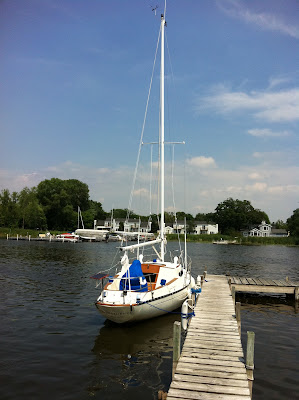 Posted by eharms at 8:07 PM No comments:

I was getting anxious and finding someone who was willing to go out and help me with this was proving more difficult than I thought. May have been the way I posed it: "Hey, I just put a new motor in my boat, would you like to go out with me and test it out to see if it works? No, not sure how long it will take--probably depends how it works. Could be 45 minutes if it works great. Could be half a day if I have to tow it back. Why wouldn't it work? Oh I don't know. Because it's a boat. With an electric motor. Yes, electric. Um, 4 batteries. Yes, people have been using electricity to power boats for years--granted those people probably know a lot more about this sort of thing than I do."


Also, many of my friends' experiences on the boat have been tainted by outings on the boat when the old motor was in place (and semi-operational). Not many quite enjoy the smell of gasoline and exhaust from 2-cycle engines as I do. Something I may miss with the electric.


My wife and 6-year old son like things to go as planned when at sea. My son has very high expectations for the new motor after hearing about it for the last 9 months, and will probably be disappointed the new motor still won't make the boat go as fast as a Cigarette boat. So I thought I'd try the commissioning myself.


I wasn't overly thrilled--but mostly due to the nail-biting experience of trying to make it through a shallow channel to get to open water. It takes me a few times to get to know where the channel is each year since the placement of the marker buoys isn't based on science or with any accuracy.

There was a 5-8 mph headwind heading out. Here are some readings I took:

Overall, the motor ran smooth but seemed to be a little erratic at lower speeds (motor would rev up and down). Seems overly sensitive at certain spans. Upon return, battery level was reading 77%. In hindsight, I probably should have double checked my knotmeter with a GPS prior to the test.

I haven't been able to bounce these off Electric Yacht yet. I'll plan to share these with Scott next week to get his opinion. This one of the first few EY installations with the Sillette saildrive. The OEM engine was a 15hp, with effective hp probably closer to 10. I seem to be in that range with the new motor.


I still need to arrange my shore power connection. I have an outlet about 75 ft away from my slip, and due to nearby slips I may need to jog the boat down a few pilings to get the cord to reach. I'm really hoping the length doesn't affect the charger. It would be ironic to have to pull up to the gas dock to use the outlet there.
Posted by eharms at 4:17 PM 2 comments:

Did a dry run motor test today at the boatyard. I can't tell you how nice it is to have a motor that doesn't require water to cool itself. It was impossible to start up the old motor while out of the water.

I had to make a few adjustments to the controller based on throttle orientation--other than that it worked as it should. Throttle seems very touchy but probably due to lack of resistance. I'll plan to launch and commission the motor sometime over the next few days. Hopefully minor things at this point like adjusting the power output, confirming voltage/RPMs, etc.
Posted by eharms at 8:57 PM No comments: